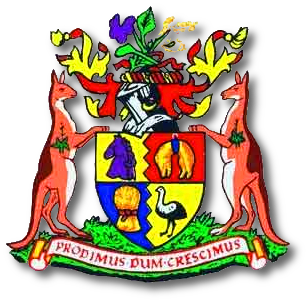 Crest:
A violet and sprig of wattle in saltire tied with a red ribbon is used as the crest in Toowoomba's coat of arms. The wattle and violet are Toowoomba's floral emblems and represent the cities colours of gold and purple respectively. The colours were adopted by the city in 1932.

Wreath (Torse):
In keeping with tradition, the wreath features the same heraldic colour (red) and heraldic metal (gold) as the mantling. It consists of two ribbons coupled together by twisting them several times, then wound around the helmet, designed to hold the mantling securely in place.

Mantling (Trimming):
The mantling streaming from the helmet consists of a heraldic colour (Red) on one side and a heraldic metal (Gold) on the other side.

Helmet (Helm):
The helmet, sitting atop the shield, is a carry over from the days when a coat of arms was used to distinguish combatants on the battlefield.

Shield:
The shield of the Toowoomba coat of arms is divided into four fields. The charges that occupy the four fields and their origin and meaning are summarized as follows:

The horse played an important role in Toowoomba's pioneer days, serving predominantly in the areas of agriculture and transport. The purple horses head on gold background represent the colours of this extraordinary garden city.

The Golden Fleece symbolizes the sheep that would have grazed on lush pastures. The red background could possibly symbolize Toowoomba's volcanic rich red soil.

The emu, a large native bird and unofficial faunal emblem of Australia was originally intended to be used as one of the supporters of the shield. This was decided against as the Australian coat of arms already had a kangaroo and emu as supporters. Instead it was incorporated into the 4th field.

Two kangaroos are used as supporters of the shield. A sprig of wattle is placed on each kangaroos shoulder to make it easily identifiable from other coat of arms.

Compartment:
A grassy mount is used as the compartment upon which the two supporting kangaroos, shield and scroll of Toowoomba's motto rest.

Motto:
Toowoomba's motto, the Latin Prodimus Dum Crescimus, translates to We prosper as we grow, indicating Toowoomba's prosperity and progression as a city.