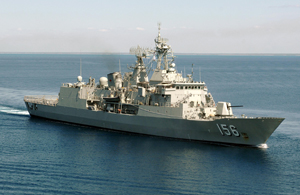 Two Royal Australian Navy (RAN) ships are named after the city of Toowoomba.

HMAS (Her or His Majesty's Australian Ship) Toowoomba 1 (J 157), a Bathurst Class Corvette (aka minesweeper). Built during WWII, it was laid down on 6th August 1940, launched on 26th March 1941, and commissioned on the 9th October 1941. It's service with the RAN ended on 5th July 1946. From there on HMAS Toowoomba 1 was transferred to the Royal Netherlands Navy and renamed Boeroe. Boeroe was decommissioned from the RNN in 1958.