Toowoomba "Where the Water Sits Down"

Toowoomba is located in a large depression which in earlier times contained extensive swamps. To the east a steep escarpment separates the cooler uplands from the warmer, more humid coastal lowlands. Like the ridge which separated the swamps, it was heavily wooded prior to European settlement.

Underlying the basin and outcropping along the escarpment or the 'Range', is a basalt cap, with much evidence of the violent volcanic activity which shaped this land more than 20 million years ago.

Remnants such as Tabletop, viewed from Picnic Point, remind us that the escarpment is an erosional one which once stretched much further to the east.

The imposing rock face, rising over 300 meters from the plain, also acts as a divide separating the streams flowing into the Pacific Ocean from those such as Gowrie Creek, which flow inland to become part of the Murray-Darling System.

For over 40,000 years the Aboriginal groups of the area - the Giabal and Jarowair people, made good use the food and water readily available in the swamps and shared this bounty with other groups as they made their way north-west to the Bunya Mountains for the festivals held every three years.

European settlement began with the entry of squatters seeking fresh lands for their large flocks of sheep. Following the route taken by Allan Cunningham, they made their way north through the New England District to the Darling Downs.

One of the earliest was Arthur Hodgson who in 1840 settled Eton Vale Run to the south of where Toowoomba stands today. The Westbrook and Gowrie Runs to the west and north of Toowoomba were taken up soon after, with Gowrie alone covering 50,000 acres (20,230 hectares).

With the encouragement of Hodgson, Thomas Alford became the first storekeeper on the Downs at the Springs in 1842. This settlement which later was named Drayton after Alford's home in England, quickly became an important transport centre for the commerce passing to and from the Downs through Gorman's and Hodgson's Gaps.

The first official European movement into what was then called the Drayton Swamp took place in 1849 when Surveyor Burnett laid out twelve allotments between West Street and the West Swamp. He pointed out that the swamp would have made a better settlement than Drayton because of its fertile soil and abundance of water. Prior to this survey, little use was made of the area apart from some timbre getting. 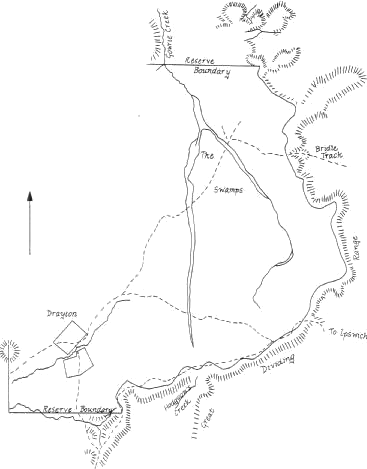 The first allotments were slow to sell until 1851 when a group of investors including Thomas Sutcliffe Mort bought allotments 10, 11 and 12. These would later be developed as the Mort Estate, Toowoomba's first residential subdivision.

Next to be surveyed was the land between the East and West Swamps, which was to become the town's centre. It was in this survey, completed in 1853, that the main streets were named.

James, Ruthven, Herries, Margaret and Hume are names associated with an incident in Scottish History known as the Gowrie Conspiracy. Ironically, the nearby Gowrie Station, from which the idea of the names probably came, had no Scottish connections but it is thought to take its name from a fresh-water mussel.

Drayton and later Toowoomba responded to the transport needs of the squatters as bullock wagons carried wool from the stations to the coast and returned with supplies.

Cunningham's Gap was always too steep and both Gorman's and Hodgson's Gaps served the squatters until the Bridle Track, later known as the Toll Bar, became the most favoured route ensuring Toowoomba's growth.

After completing the steep ascent up the Toll Bar, travellers emerged where Ipswich Street now meets Tourist Road and then continued down James Street where the first Town Hall was located. In 1857 a newspaper reported that between 50 and 60 drays has camped at the "Toowoomba and Drayton Swamp" in one week.

For some time leading citizens resented their rapidly growing town being named "The Swamp" and on New Year's Day 1858, during a sports meeting a red flag was hoisted bearing the name "Toowoomba" in white letters.

Of the many opinions regarding the origin of the name "Toowoomba" the most favoured is that it is a corruption of the Aboriginal word "Tchwampa" meaning 'water sit down' or 'place where the rushes grow'.

Industries rapidly followed rural development; some near the swamps adding to the domestic pollution by discharging effluent. Epidemics of typhoid and cholera occurred until the swamps were drained in 1874 and a articulated water supply introduced in 1880.

Toowoomba's growth is also reflected in its buildings, many of which grace the tree-lined, basalt-kerbed streets contributing to the city's identity.

These include places of worship such as the Wesley Church in Neil Street, now an adjunct to the outstanding art deco styled Empire Theatre next door, commercial buildings like the imposing Railway Station built in 1874 and recently restored and Clifford House, originally intended as a Gentlemen's Club. Private residences add to the character of the city with larger ones on the Range and more modest Queensland houses and cottages pre-dating World War II in locations such as Mort and Caledonian Estates.

Toowoomba's importance as a transport centre continued with the upgrading of the Toll Bar Road and the coming of the railway, the first over the Divide, in 1867, linking Toowoomba to Ipswich. this saw the commercial centre of town move from James Street towards Russell Street.

The rail link to Brisbane was not completed until the construction of the Indooroopilly Bridge in 1875. Branch lines soon linked Toowoomba tocentres such as Crow's Nest and Pittsworth and until 1930 the only rail link between Brisbane and Sydney was through Toowoomba with passengers changing trains at Wallangarra.

Toowoomba became a municipality in 1860 and was incorporated as a city in 1904, while Drayton became a suburb of Toowoomba in 1949.

The Toowoomba Regional Art Gallery, Cobb and Co. Museum, thriving theatre groups and annual festivals such as the Carnival of Flowers identify Toowoomba as the region's cultural centre as well as the commercial, transportation and services centre of the Darling Downs.

This brochure has been produced as a community service by

A series of self-directed walks brochures under the general title A Walk Through History produced by the Toowoomba City Council.